The Terror (now on BBC iPlayer)

The ten-part show is described as a horror anthology series, inspired by true events and based on the fictionalised account of Captain Sir John Franklin's lost expedition to the Arctic. Intrigued to know more? Here's what we know…

Is The Terror based on a true story?

The Terror is based on true events, however, it is largely centred on the fictionalised account of Captain Sir John Franklin's expedition as told in the 2007 novel of the same name by Dan Simmons.

The BBC's synopsis reads: "It follows the Royal Navy's perilous voyage into unchartered territory as the crew attempts to discover the Northwest Passage. Faced with treacherous conditions, limited resources, dwindling hope and fear of the unknown, the crew is pushed to the brink of extinction. 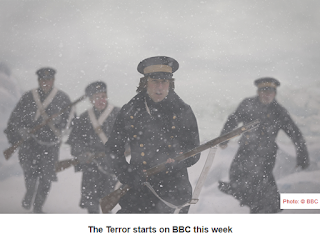 "Frozen, isolated and stuck at the end of the earth, The Terror highlights all that can go wrong when a group of men, desperate to survive, struggle not only with the elements, but with each other."

While it initially focusses on the real-life disappearance of the ships, the show then takes a fictional and supernatural turn for the remaining episodes – taking inspiration from the horror novel of the same name.

The first episode begins with the story of the HMS Terror and HMS Erebus ships departing England for their Northwest Passage expedition in 1845. However, the ships, consisting of 24 officers and 110 men on board, never returned after finding themselves getting caught in arctic ice.

The drama then moves through time, portraying an imagination of what might have happened at the time, between 1846 and 1847.

In real life, the two ships, led by Captain Franklin, met with disaster and the crews eventually perished in the cold weather and arctic conditions.

Modern day excavations has also revealed fascinating details about the disaster. In 2014, a Canadian search term located the Erebus wreck in the Queen Maud Gulf. Two years later, the Arctic Research Foundation located the wreck of HMS Terror. The findings conducted by modern forensics suggested the men were forced to resort to cannibalism in order to survive.