How much dirty money does YOUR bank launder?

FinCEN Files: All you need to know about the documents leak

Leaked documents involving about $2tn of transactions have revealed how some of the world's biggest banks have allowed criminals to move dirty money around the world.

They also show how Russian oligarchs have used banks to avoid sanctions that were supposed to stop them getting their money into the West.

It's the latest in a string of leaks over the past five years that have exposed secret deals, money laundering and financial crime. 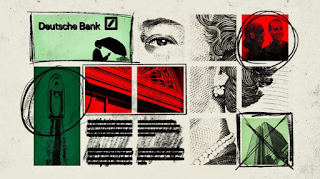 What has been revealed?

* HSBC allowed fraudsters to move millions of dollars of stolen money around the world, even after it learned from US investigators the scheme was a scam.

* JP Morgan allowed a company to move more than $1bn through a London account without knowing who owned it. The bank later discovered the company might be owned by a mobster on the FBI's 10 Most Wanted list.

* Evidence that one of Russian President Vladimir Putin's closest associates used Barclays bank in London to avoid sanctions which were meant to stop him using financial services in the West. Some of the cash was used to buy works of art. The husband of a woman who has donated £1.7m to the UK's governing Conservative Party's was secretly funded by a Russian oligarch with close ties to President Putin.

* The UK is called a "higher risk jurisdiction" and compared to Cyprus, by the intelligence division of FinCEN. That's because of the number of UK registered companies that appear in the SARs. Over 3,000 UK companies are named in the FinCEN files - more than any other country.

* Chelsea owner Roman Abramovich once held secret investments in footballers not owned by his club through an offshore company.

* Standard Chartered moved cash for Arab Bank for more than a decade after clients' accounts at the Jordanian bank had been used in funding terrorism.

In the mean time YOUR bank can still heavily penalise you for being overdrawn or in mortgage arrears...