A close look at Bolivian election data suggests an initial analysis by the O.A.S. that raised questions of vote-rigging — and helped force out a president — was flawed. 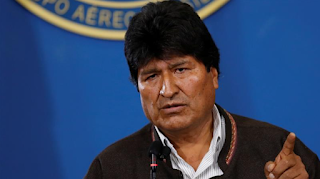 The election was the most tightly contested in decades: Evo Morales, Bolivia’s first Indigenous president, was running for a fourth term, facing an opposition that saw him as authoritarian and unwilling to relinquish power.

As the preliminary vote count began, on Oct. 20, 2019, tensions ran high. When the tallying stopped — suddenly and without explanation — then resumed again a full day later, it showed Mr. Morales had just enough votes to eke out a victory.

Amid suspicions of fraud, protests broke out across the country, and the international community turned to the Organization of American States, which had been invited to observe the elections, for its assessment.

The organization’s statement, which cited “an inexplicable change” that “drastically modifies the fate of the election,” heightened doubts about the fairness of the vote and fueled a chain of events that changed the South American nation’s history. The opposition seized on the claim to escalate protests, gather international support, and push Mr. Morales from power with military support weeks later.

Now, a study by independent researchers, using data obtained by The New York Times from the Bolivian electoral authorities, has found that the Organization of American States’ statistical analysis was itself flawed.

The conclusion that Mr. Morales’s share of the vote jumped inexplicably in the final ballots relied on incorrect data and inappropriate statistical techniques, the researchers found.