Econowarfare: the US, the World Bank and the IMF

WASHINGTON – In a leaked military manual on “unconventional warfare” recently highlighted by WikiLeaks, the U.S. Army states that major global financial institutions — such as the World Bank, International Monetary Fund (IMF), and the Organization for Economic Cooperation and Development (OECD) — are used as unconventional, financial “weapons in times of conflict up to and including large-scale general war,” as well as in leveraging “the policies and cooperation of state governments.”

The document (*.pdf), officially titled “Field Manual (FM) 3-05.130, Army Special Operations Forces Unconventional Warfare” and originally written in September 2008, was recently highlighted by WikiLeaks on Twitter in light of recent events in Venezuela as well as the years-long, U.S.-led economic siege of that country through sanctions and other means of economic warfare. Though the document has generated new interest in recent days, it had originally been released by WikiLeaks in December 2008 and has been described as the military’s “regime change handbook.” 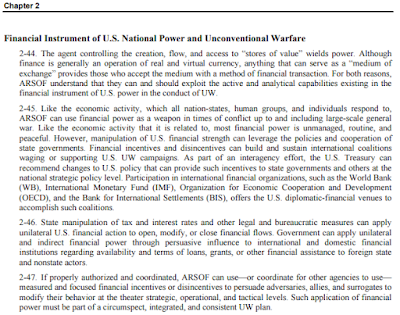 WikiLeaks’ recent tweets on the subject drew attention to a single section of the 248-page-long document, titled “Financial Instrument of U.S. National Power and Unconventional Warfare.” This section in particular notes that the U.S. government applies “unilateral and indirect financial power through persuasive influence to international and domestic financial institutions regarding availability and terms of loans, grants, or other financial assistance to foreign state and nonstate actors,” and specifically names the World Bank, IMF and The Organisation for Economic Co-operation and Development (OECD), as well as the Bank for International Settlements (BIS), as “U.S. diplomatic-financial venues to accomplish” such goals.

The manual also touts the “state manipulation of tax and interest rates” along with other “legal and bureaucratic measures” to “open, modify or close financial flows” and further states that the U.S. Treasury’s Office of Foreign Assets Control (OFAC) – which oversees U.S. sanctions on other nations, like Venezuela — “has a long history of conducting economic warfare valuable to any ARSOF [Army Special Operations Forces] UW [Unconventional Warfare] campaign.”

This section of the manual goes on to note that these financial weapons can be used by the U.S. military to create “financial incentives or disincentives to persuade adversaries, allies and surrogates to modify their behavior at the theater strategic, operational, and tactical levels” and that such unconventional warfare campaigns are highly coordinated with the State Department and the Intelligence Community in determining “which elements of the human terrain in UWOA [Unconventional Warfare Operations Area] are most susceptible to financial engagement.”

The role of these “independent” international financial institutions as extensions of U.S. imperial power is elaborated elsewhere in the manual and several of these institutions are described in detail in an appendix to the manual titled “The Financial Instrument of National Power.” Notably, the World Bank and the IMF are listed as both Financial Instruments and Diplomatic Instruments of U.S. National Power as well as integral parts of what the manual calls the “current global governance system.”

Furthermore, the manual states that the U.S. military “understand[s] that properly integrated manipulation of economic power can and should be a component of UW,” meaning that these weapons are a regular feature of unconventional warfare campaigns waged by the United States.

Another point of interest is that these financial weapons are largely governed by the National Security Council (NSC), which is currently headed by John Bolton. The document notes that the NSC “has primary responsibility for the integration of the economic and military instruments of national power abroad.”

Given the close relationship between the U.S. government and these international financial institutions, it should come as little surprise that – in Venezuela – the U.S.-backed “interim president” Juan Guaidó – has already requested IMF funds, and thus IMF-controlled debt, to fund his parallel government.

This is highly significant because it shows that top among Guaidó’s objectives, in addition to privatizing Venezuela’s massive oil reserves, is to again shackle the country to the U.S.-controlled debt machine.

As the Grayzone Project recently noted:

Venezuela’s previous elected socialist president, Hugo Chávez, broke ties with the IMF and World Bank, which he noted were “dominated by US imperialism.” Instead Venezuela and other left-wing governments in Latin America worked together to co-found the Bank of the South, as a counterbalance to the IMF and World Bank.”

Guaidó has moved to re-integrate Venezuela into these very same Washington-dominated financial institutions. In addition to seeking financing from the IMF, Guaidó is likewise trying to send a new representative to the Inter-American Development Bank.

Venezuela’s right-wing opposition has made it clear that it plans to pursue aggressive neoliberal capitalist reforms. The opposition-controlled National Assembly has also declared in its “transition” plans that the “centralized model of controls of the economy will be replaced by a model of freedom and market based on the right of each Venezuelan to work under the guarantees of property rights and freedom of enterprise.”

This plan might be a dream for foreign corporations, but even many Venezuelans marching against their government might soon decide that stripping state assets is not worth fighting for.