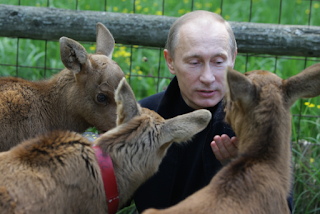 Three unidentified animals throwing themselves at the Russian President

Former kids’ TV presenter Reggie Yates is making good on the promise shown in last year’s documentary series about South Africa with another intelligent and provocative three-parter. Far Right and Proud: Reggie Yates’ Extreme Russia was a timely look at Russia’s recent wave of fervent nationalism, which has taken hold particularly among the young.

His first stop was the Moscow headquarters of Set, a social media-savvy youth group that’s part-art collective, part-Putin fan club. If Yates hadn’t already guessed what they were about, the decor gave the game away. Every inch of wall space was adorned with images of the Russian leader – Putin on the ski slopes, Putin doing karate kicks and Putin being kind to the animals.

“It’s actually animals that love him,” explained a young man in hipster specs and a Putin T-shirt. “They can feel he is a kind and strong person.”