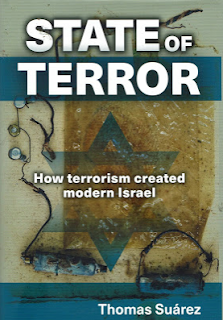 Tom Suarez has, on the basis of research in the Government’s archive written a book documenting the terrorist beginnings of the Israeli state. I have yet to read and review the book but by all accounts it is an impeccably documented book. (Review by Tony Greenstein of Tom Suarez' book - 'State of Terror')

Tom Suarez has, on the basis of research in the Government’s archive written a book documenting the terrorist beginnings of the Israeli state. I have yet to read and review the book but by all accounts it is an impeccably documented book.

What is also clear is that the research in this book, which is based on over 400 documents from the government’s own archives is unacceptable to the Zionist lobby in this country. The Board of Deputies of British Jews, an overtly Zionist body, which calls itself the representative body of Jews in this country has done its best to stop its author Tom Suarez speaking to meetings about his findings.

The Board of Deputies incidentally is elected by nobody. It is based on synagogue membership. It doesn’t represent Britain’s secular Jews, about half of all British Jews, the most cultured and educated section of British Jews but narrow minded businessmen and middle class Zionist bigots. Many of the synagogues elect their representatives on an all male electorate. Others are simply rotten boroughs where there is no election.

On the basis of the squeals of Britain’s Israel lobby, which doesn’t want the truth about Israel to be known, a campaign has been mounted to stop Tom Suarez speaking. One wonders what they have to fear?

What is worse is that this is being done under the cover of the government’s Prevent programme. Prevent was introduced on a mandatory basis under the government’s Counter Terrorism & Security Act 2015. Purportedly designed to prevent terrorism it operated on the theory that people become terrorists because they are ‘radicalised’. This absurd theory misses out small things like the fact that people became terrorists because the government in alliance with the United States went and bombed the hell out of Iraq and Afghanistan killing over 1 million people. Some people wrongly believed that the attack on these countries was because they were Muslim.

The Prevent strategy assumes that people become ‘radicalised’ on the basis of ‘extremist’ political views. What are ‘extremist’ views? Anything which doesn’t subscribe to ‘British values’. Presumably Marxism, subversion, going on strike even, can in certain circumstances be held to be anti-British. Under this all encompassing rubric, the government has forced universities to vet speakers for public meetings because their young audiences may be susceptible to being unduly influenced by ideas which are not normative and conservative. Anti-imperialist ideas, Palestine solidarity and anything else outside the mainstream can be considered ‘extremist’ and thus akin to terrorism. This is the climate we are dealing with. That is also why we need to fight back.

Suarez’s book attacks Israel as a terrorist state. It is therefore outside the political mainstream. It therefore gives a license to pathetic pipsqueaks like Portsmouth’s Prevent Officer Charlie Pericleous to go around trying to close political meetings they don’t like. Of course this doesn’t excuse in any way the cowardly owners of venues – whether it is the Quaker’s Meeting House in Cambridge which cancelled a talk by Suarez or the Friendship Centre in Portsmouth. A similar meeting at the Friends Meeting House in Brighton which I spoke at with Jackie Walker was the subject of similar attempts to stop the meeting by the Board of Deputies. Fortunately in our case the Friends had a stiffer backbone than their counterparts in Cambridge. In Nottingham another meeting by Jackie and myself also had to be moved at the last minute.

We are facing a concerted attack by the Conservative government and the Israel/Zionist lobby in this country on Free Speech. It needs a robust campaign in response because this is a defence of the very essence of freedom and basic democratic liberties.

Britain’s Palestine Solidarity Campaign has kept its head down and done virtually nothing in response to this attack on the rights of Palestine supporters and anti-Zionists. At the moment PSC is incapable of punching its way out of a paper bag, still less mounting a political fightback against government and state attacks. It even half-welcomed the government’s new International Holocaust Remembrance Alliance definition of anti-Semitism until I threw a fit.

Ben Jamal’s advice to Portsmouth PSC is extremely inadequate. What is needed are not apologies after the event by Council bureaucrats but a determined campaign to ensure that no Council anywhere or any University tries to ban speakers that the Establishment in this country doesn’t like. Universities are under a legal obligation to defend free speech. Councils have to be made to if necessary.