The American conservative/libertarian blogosphere/social media has rarely been more awash with ultra-dumb CTs than in the post Orange Moron era. This one from 'GEEEZ....':

Last night, Steve Hilton, of The Next Revolution (the show name which cracks me up since he’s British..we know what happened in our last revolution!), explained last night how it is FAUCI WHO MIGHT HAVE ACTUALLY CAUSED COVID. 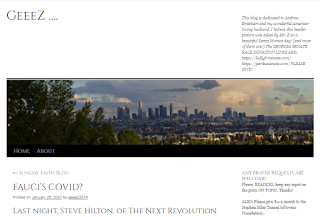 Yes, it took hundreds of epidemiologists to convince Obama to STOP “Gain of function research” and Obama did BAN IT…But Fauci got funding for it and moved the work to the Wuhan lab….where an ‘accident’ seems to have happened.

FAUCI HIMSELF COULD BE RESPONSIBLE…and now he only goes on CNN or MSNBC: He will not come on FOX. WHY?

So has Fauci caused Covid? It would be irresponsible NOT to SPECULATE!!

Com'on folks, he doesn't want to appear on Faux Noise, where are the clueses? Discuss and contrast!!

Source of this carnival of stupidity.