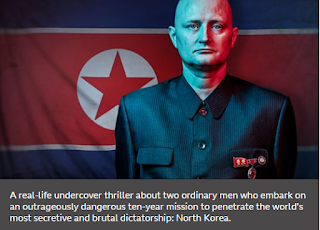 Physically, Ulrich Larsen doesn’t stand out. Polite, unassuming, his unmemorable 44-year-old face is how I imagine an efit template might be, what you start with before you add distinguishing features. You get to decide who he is. Perfect for blending in. Or infiltrating the world’s most secretive regime perhaps, which, as it happens, is what he did. Larsen is “the Mole”.

Jim Latrache-Qvortrup is the opposite. Forty-eight, big, bold, bearded, inked, with an expensive-looking set of teeth and an explosive laugh. Ex-military? Better still, he joined the French Foreign Legion at 19. Crime? Tick; he spent eight years in jail for drug dealing. International arms dealer, buying stinger missiles from North Korea for anyone who will have them? Actually no, but he does a very good job of pretending to be one, hardly has to act at all in fact. Latrache-Qvortrup is “Mr James”.

They’re together in a room somewhere in Copenhagen, speaking to me via Zoom. Zoom!? Is that secure? Could Kim Jong-un himself be listening in, ready to fire off a Scud? They’re not overly concerned. Larsen says he has altered some of his daily routines, doesn’t go to the same places every day with his family. Latrache-Qvortrup hasn’t changed anything; he’s not worried. I doubt if he is ever very worried about anything. “I don’t think I should take my next holiday in North Korea,” he says. And he laughs his big laugh.

At which point some explanation is probably needed. God, where to start? It’s complicated. Larsen is a chef in Copenhagen, retired since getting a chronic disease of the pancreas. After seeing the film The Red Chapel, about a trip Mads Brügger made to North Korea, Ulrich contacts the Danish film-maker about somehow continuing the work, helping to expose the reality of life in the DPRK. This starts about a decade ago, with Larsen joining his local branch of the Korean Friendship Association (KFA), a bunch of ageing commies whose ranks he quickly rises through. He makes his first trip to North Korea. Got it so far? The project, and Brügger’s new film, is under way.

Ulrich gains the trust of the head of the KFA, a dodgy Spanish businessman named Alejandro Cao de Benós, AKA “the Gatekeeper of North Korea”, who has links to the regime. Now that they have their in, Brügger decides they need a further character and recruits Latrach-Qvortrup, to play Mr James, a Scandinavian businessman with a lot more money than morals. Larsen and Latrach-Qvortrup travel to North Korea where, in a secret luxury bunker, officials show them a menu of weaponry, missiles, tanks, etc, that Mr James might like to buy. It’s the start of a beautiful friendship that reaches over borders, around ideological differences and under UN sanctions, and culminates in them agreeing to a complicated triangle deal with a Jordanian smuggling oil into North Korea. Oh, and they also agree to construct an underground factory to make both weapons and methamphetamine, disguised as a luxury tourist resort, on an island in Uganda.

Got it? Kind of Homeland meets The Night Manager meets Breaking Bad if you want TV comparisons, though – incredibly – this one is documentary. There’s even a Dame Judi Dench M character, a former M15 officer debriefing Larsen and Latrach-Qvortrup in a country house. And the above isn’t even the half of it, two hours of documentary into a couple of paragraphs doesn’t easily go, you need to see it, and you really should. It’s an extraordinary project, absurdly brave, much of it filmed on hidden cameras, with moments of proper tension. And even the odd laugh – like when Mr James manages to shake off his minder at a crowded Pyongyang waterpark for long enough to try out the biggest slide. So this huge bearded bear of a man, covered in tats, like nothing the locals have ever seen before, enters their world with an enormous splash. “The feeling I had was what the first black man in Denmark must’ve felt,” Jim tells me. “It was like everything stood still.”

When and how did Larsen get started on this crazy path? How does a former chef, living on benefits, end up in Pyongyang facilitating arms deals? As a kid he lived in the shadow of East Germany, he says. Just after the wall came down he met a boy from Rostock, went to visit him there, was struck by the difference, began to be interested. “The Korean peninsula is the same as Germany was, divided because of a war. I started to get interested, why still there is no peace contract between the US and North Korea. Then Mads made The Red Chapel, I thought why not help him figure out something more.”

He’s not especially political, he says. Certainly no fan of communism, but neither is he rightwing. Was he into spy thrillers? “I think every boy’s dream is to be James Bond. But now I know it’s not how it works today – shooting people and driving fast cars. Just a lot of time talking and getting the confidence from people. It’s like poker, you need to play your cards right to win. I never imagined sitting at a table in North Korea being handed papers to buy weapons.”

Latrach-Qvortrup says he’s an adrenaline junkie, and he got involved because he needed a fix. “I’d been out of prison for two years and I had started psychology at Copenhagen University and that was boring as hell so I just saw it as an adrenaline kick.” He says he brought some of his previous wild-living drug-dealer existence to the part. “I thought if I was very calm that could make them insecure, but if I got drunk and talked shit, the last thing they would think was that I was an agent.” So get drunk and talk shit is what he did, and they fell for it.

What do they think they have achieved, I wonder? “I think we have shown the world how North Korea and so-called friends of North Korea work,” says Larsen. “How the system works, you know, money, weapons, drugs, oil, getting round the sanctions of the United Nations.”

For Latrach-Qvortrup, it shows how easily it is for someone like Mr James “to get some really deadly weapons and build an island in a safe country. And then distribute weapons to all the enemies of the western world. It’s dead scary that there’s this guy in Spain who facilitates that.” They both single out Cao de Benós, under the cover of his friendship association, as the big villain in this.

Along with Kim Jong-un, his father and his grandfather. “There are 23 million North Koreans who are isolated and kept in this hermit kingdom,” says Larsen. “They are told from when they are born that outside North Korea the world is bad and that they should praise the leaders who take care of them. They are so loyal to the leaders even though two of them are dead.”

Larsen tells me about a banquet he attended on one of his trips there, where, passing the kitchen, he saw the staff eating the leftover scraps from the guests’ plates. “At this point I was like: ‘This is a country with a lot of problems.’” I wonder how the return to mundane reality has been. Larsen had some interesting conversations with his wife who, incredibly, he never told what he was up to. “She was a bit shocked, then coming up with questions like: ‘Why didn’t you tell me?’ I was like: ‘As you said yourself, if I had told you first you wouldn’t have let me go, or you would’ve been scared as hell till I came back.’”

She did know he had gone to North Korea, but he told her he was looking into some business opportunities, importing clothes. Not stinger missiles. “I hope one day she’ll be proud of me,” Larsen says. And he’s enjoying spending more time with his kids, and watching English Premier League football at the weekend. Larsen supports Liverpool, don’t mention the 7-2 drubbing by Villa.

Latrach-Qvortrup’s wife knew all along. “She waited for me all the time I was in prison, so I owned up to her when I had another crazy idea.” He has a business, massage and physiotherapy. And he’s started sponsoring some MMA fighters. Not quite international arms dealing maybe, but it’s something. Better than studying psychology anyway.

How do we know that while they were over there, down in that bunker or at the waterpark perhaps, they weren’t turned, and they’re not now double agents working for the DPRK, sending back secrets of, I don’t know, how to make Danish pastries? Latrach-Qvortrup laughs. Larsen smiles. “Wait for the sequel,” he says.

Review by the Grauniad.