Is there a G-d after all? 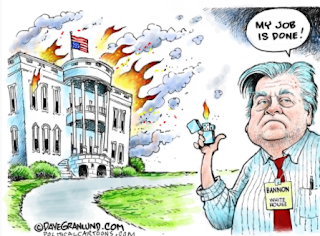 Former Trump campaign manager Steve Bannon, triple-amputee Air Force vet Brian Kolfage and two others have been arrested and charged with defrauding hundreds of thousands of donors with their ‘We Build the Wall’ online fundraiser.

Bannon, Kolfage, Andrew Badolato and Timothy Shea are accused of scamming over $25 million under the guise of raising funds to build a wall on the US’ southern border with Mexico in an indictment unsealed Thursday in Manhattan federal court.

While donors to the crowdfunding campaign were told Kolfage, the public face of We Build the Wall, “would not be paid a cent,” the quartet allegedly funneled hundreds of thousands of dollars to themselves, concealing the transactions with phony invoices and accounts.

However, the former Trump strategist’s troubles may have only begun. GTV Media Group, a media company he launched earlier this year with exiled Chinese businessman Guo Wengui, is under investigation by state and federal authorities over a $300 million private offering, according to a Wall Street Journal report published Wednesday. Multiple banks have reportedly frozen accounts associated with the round of fundraising.

Earlier this week, Kolfage announced We Build the Wall would be moving from GoFundMe, saying it was because the platform “supports the racist attacks by #BlackLivesMatter.” He nevertheless congratulated donors on “the largest GoFundMe campaign in history.”

Kolfage’s latest fundraiser, “Black Lives Matter is now a Racist Hate Group,” had been deleted from the crowdfunding platform.

To answer my own title question: probably NOT! Bannon et al will probably get off with a slap on the wrist due to 'Very Expensive Lawyer Syndrome'. I mean, Bannon: a finer 'man of the people' you never saw, right?