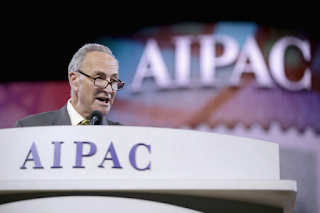 Congressional Democrats really hate the National Rifle Association and its success in shutting down debate on gun policy through intimidation — from cutting off campaign contributions, to funding opponents, to launching primaries, to simply making legislators’ lives miserable through harassment.

Leading gun control Democrats, like Senator Richard Blumenthal (D-CT), rightly understand that, in his words, “we must break the grip of the NRA” if we are ever going to see Congressional action on guns.

Meanwhile Blumenthal, and most of his Democratic colleagues in both Houses, are in the grip of a foreign policy lobby as powerful as the NRA, the American Israel Public Affairs Committee or AIPAC. (Republicans, who come to their militant support for Israeli policies instinctively, don’t warrant AIPAC arm-twisting but Democrats, invariably dovish on all foreign policy issues except Israel, certainly do.)

AIPAC uses the same tactics as the NRA to ensure that the United States never deviates from support for whatever policy the Israeli government is pushing at the moment. These days those policies are: undermining President Obama’s nuclear deal with Iran, suppressing efforts by Americans to use selective boycotts to end the Israeli occupation of the West Bank and the blockade of Gaza, and, as always, to prevent any pressure on Israel to advance peace with the Palestinians despite the fact that the United States provides more aid to Israel than to any other country.

Having worked in the House and Senate for 20 years, I saw all of AIPAC’s tactics first hand. I also worked at AIPAC itself where, in the very office in which I sat, I watched my colleagues working hard and effectively to end the careers of politicians who deviated from the AIPAC line. (In the interests of honesty I should admit that I had no problems with AIPAC when I worked there. It was only years later, while working on Capitol Hill, that I came to understand that the policy of undeviating support for the Israeli government was not in American interests and that AIPAC sustained that support through rather scary intimidation).

But that is a whole story on its own. I want to focus on how some of the same Democrats who, rightly, are outraged that their Republican colleagues appear to be owned by the NRA act precisely the same way when it comes to the lobby that keeps them on a leash, AIPAC.

As I wrote here in HuffPost in July:

The latest evidence of that slavishness {to AIPAC] comes in the form of growing support among Democrats in both Houses for legislation sponsored by Sen. Benjamin Cardin (D-MD) and co-sponsored by Senate Democratic leader Chuck Schumer that would make it a felony for Americans to support the international boycott against Israel, commonly known as BDS. Anyone guilty of violating the prohibitions will face a minimum civil penalty of $250,000 and a maximum criminal penalty of $1 million and 20 years in prison.

According to the ACLU, the Cardin legislation would “bar U.S. persons from supporting boycotts against Israel, including its settlements in the Palestinian Occupied Territories (emphasis mine) conducted by international governmental organizations, such as the United Nations and the European Union. It would also... include penalties for simply requesting information about such boycotts. Violations would be subject to a minimum civil penalty of $250,000 and a maximum criminal penalty of $1 million and 20 years in prison....This bill would impose civil and criminal punishment on individuals solely because of their political beliefs about Israel and its policies.”

That is pretty amazing. The Cardin bill would essentially blow a giant hole in the First Amendment. Americans would continue to be allowed to hold any belief they want, about pretty much anything, with the exception of Israel. Although I, myself, do not support the boycott Israel movement (BDS), I also know that it was the Montgomery Bus Boycott that launched the civil rights movement. It was international boycotts of South Africa that brought down apartheid. Americans even used boycotts to kill North Carolina’s hateful “bathroom” law designed to punish transgender people. (Apparently, Cardin would permit Americans to boycott a U.S, state, just not the State of Israel.)

The Cardin bill is frightening and, if applied in any other context but the Israeli one, would be inconceivable. But all rules are suspended when it comes to the country about which former Vice President Joe Biden said “there must be no daylight, no daylight” between its policies and those of the United States. Yes, he actually said “no daylight” twice and, no, it is inconceivable that any American leader would say that about any other country, including Canada!

So, naturally, some Democrats — including Senators Schumer (NY), Cantwell (WA), Bennett (CO), Hassan (NH), and Wyden (OR)—and House members including Hoyer (MD), Kennedy (MA), Lieu (CA), Lowey (NY), Schiff (CA), Sinema (AZ)) — are supporting this unconstitutional legislation because AIPAC tells them to. (The full list of House and Senate co-sponsors appear here and here). Worst of all, in both houses, it is Democratic support that will enable the legislation to pass and become law.

But it’s not all bad news. First, the number of Democratic co-sponsors for this AIPAC initiative is much lower than for past efforts when it has usually approached 100 percent. That is because the ever growing progressive base of the Democratic party (Sanders and Clinton supporters both) is finally challenging legislators who are progressive on everything but the Middle East.

In the case of the Cardin bill, one Democratic senator, Kristin Gillibrand (NY), took the unusual step of formally removing her name as co-sponsor after meeting with constituents including ACLU lawyers. And Sen. Cardin’s fellow Maryland senator, Chris Van Hollen, in his first year in the Senate, took the unusual step of breaking with his senior colleague over the bill despite heavy AIPAC lobbying and because his progressive constituents did not allow AIPAC to monopolize the debate as it usually does. Maryland opponents of the Cardin bill have been showing up wherever Maryland legislators appear for months now, including at Cardin events.

In short, while the NRA’s chokehold on Republicans seems tighter than ever, AIPAC’s grip on Democrats is loosening as younger and more progressive activists flex their political muscles. This is all good. And bodes well for the future.

The job. however, is to make all Democrats understand that while we support their positions on other issues, Middle East policy is the real litmus test.

After all, most Democrats are not subject to unrelenting pressure from lobbies and donors who oppose their positions on equal rights, guns, climate change, choice, etc. And even if they did, they almost always come from states or districts where the progressive position dominates.

That is why, for them, the test case is the Middle East: supporting peace, sovereignty, and security for Israelis and Palestinians both, as well as supporting the Iranian nuclear deal which is opposed by Israel and its lobby but viewed as indispensable by every other nation on the planet.

Otherwise, they can just shut up about Republicans being owned by the NRA. Bought is bought.