... and while the Israelis celebrate moving the Embassy of Mordor to Jerusalem, 38 Palestinians (to date and this date isn't over yet) have been killed and 1,703 have been injured by the Israeli 'Defence' Forces.

It appears the Chosen Ones are exempt from the 'Thou Shalt not Kill' command... 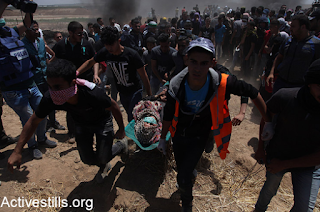 The rest of the world in the mean time does nothing:

Recent history indicates that Israel can “get away with” a great deal. It long ago closed Gaza’s port, airport and land border. The Palestinians’ traditional supporters in the Arab world, especially Saudi Arabia and Egypt, ignore them. Russia and China express sympathy while doing nothing. Nominal aid comes from Iran in the form of mostly ineffectual weapons for Hamas, a rare instance of the Shiite theocrats arming Sunni fundamentalists. Former Israeli Prime Minister Yitzhak Rabin spoke for most of his countrymen when he said of Gaza, “If only it would just sink into the sea.”