Clowns in da White House: Stupid is as Stupid does...

The Orange Fucktard Supremo and his son Don 'Vampirello' Jr are at it again: irresponsable and mendacious downplaying of Coronavirus in the US

As coronavirus deaths in the US approach 1,000 a day in the current record surge of infections, Donald Trump and his son, Don Jr, appear intent on publicly disputing the lethality of the outbreak at repeated opportunities. 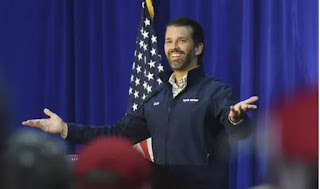 Don Jr sat for an interview with Fox News on Thursday night during which he called critics of the Trump administration’s approach to the pandemic “truly morons” and said that deaths from Covid-19 in America right now are “almost nothing”.

Don Jr. falsely claimed on Thursday that the number of Americans dying from the coronavirus amounts to “almost nothing.”

An average of 1,000 Americans a day are dying from Covid-19 right now.pic.twitter.com/oHNzQtfDOS

Meanwhile, having said at a rally last weekend that “you don’t see death” at this stage of the pandemic in the US, Donald Trump reiterated in a tweet on Friday morning that deaths are “WAY DOWN” in the US, mass testing is exaggerating the numbers of infections and hospitals are coping.

In fact, many hospitals across the US, especially the midwest and upper midwest heartland and Texas are on the brink of being overwhelmed and are setting up field hospitals and calling in the military and assistance from state governors.

On Fox News, Don Jr said: “If you look at, I put it on my Instagram, I went through the CDC [Centers for Disease Control and Prevention] data because I kept hearing about the new infections, [but] why aren’t they talking about deaths? Oh, oh, because the number is almost nothing, because we have gotten control of this thing.”

Public health experts, such as the top public health official on the White House’s own coronavirus taskforce, Anthony Fauci, just this week warned that the US was in for “a whole lot of pain” this winter because it is not controlling the pandemic, and that life probably will not return return to normal until late 2021 or 2022, even with a successful vaccine likely to emerge in the coming months.

Nearly 90,000 new coronavirus infections were reported in the US on Thursday, the highest single-day total in the country since the pandemic began, or about one new case every second.

In the recent surge deaths can lag cases by several weeks. But already deaths are increasing in about half of states, the New York Times reported.

And in the past month, about a third of US counties hit a daily record of deaths in the pandemic.