J'accuse: Trump and the US Corona Disaster 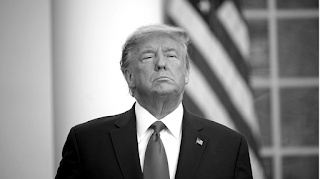 "I don’t take responsibility at all,” said President Donald Trump in the Rose Garden on March 13. Those words will probably end up as the epitaph of his presidency, the single sentence that sums it all up.

The United States is on trajectory to suffer more sickness, more dying, and more economic harm from this virus than any other comparably developed country.

That the pandemic occurred is not Trump’s fault. The utter unpreparedness of the United States for a pandemic is Trump’s fault. The loss of stockpiled respirators to breakage because the federal government let maintenance contracts lapse in 2018 is Trump’s fault. The failure to store sufficient protective medical gear in the national arsenal is Trump’s fault. That states are bidding against other states for equipment, paying many multiples of the precrisis price for ventilators, is Trump’s fault. Air travelers summoned home and forced to stand for hours in dense airport crowds alongside infected people? That was Trump’s fault too. Ten weeks of insisting that the coronavirus is a harmless flu that would miraculously go away on its own? Trump’s fault again. The refusal of red-state governors to act promptly, the failure to close Florida and Gulf Coast beaches until late March? That fault is more widely shared, but again, responsibility rests with Trump: He could have stopped it, and he did not.

The lying about the coronavirus by hosts on Fox News and conservative talk radio is Trump’s fault: They did it to protect him. The false hope of instant cures and nonexistent vaccines is Trump’s fault, because he told those lies to cover up his failure to act in time. The severity of the economic crisis is Trump’s fault; things would have been less bad if he had acted faster instead of sending out his chief economic adviser and his son Eric to assure Americans that the first stock-market dips were buying opportunities. The firing of a Navy captain for speaking truthfully about the virus’s threat to his crew? Trump’s fault. The fact that so many key government jobs were either empty or filled by mediocrities? Trump’s fault. The insertion of Trump’s arrogant and incompetent son-in-law as commander in chief of the national medical supply chain? Trump’s fault.

For three years, Trump has blathered and bluffed and bullied his way through an office for which he is utterly inadequate. But sooner or later, every president must face a supreme test, a test that cannot be evaded by blather and bluff and bullying. That test has overwhelmed Trump.

Trump failed. He is failing. He will continue to fail. And Americans are paying for his failures.

The coronavirus emerged in China in late December. The Trump administration received its first formal notification of the outbreak on January 3. The first confirmed case in the United States was diagnosed in mid-January. Financial markets in the United States suffered the first of a sequence of crashes on February 24. The first person known to have succumbed to COVID-19, the disease caused by the coronavirus, in the United States died on February 29. The 100th died on March 17. By March 20, New York City alone had confirmed 5,600 cases. Not until March 21—the day the U.S. Department of Health and Human Services placed its first large-scale order for N95 masks—did the White House begin marshaling a national supply chain to meet the threat in earnest. “What they’ve done over the last 13 days has been really extraordinary,” Jared Kushner said on April 3, implicitly acknowledging the waste of weeks between January 3 and March 21.

Those lost weeks also put the United States—and thus the world—on the path to an economic collapse steeper than any in recent memory. Statisticians cannot count fast enough to keep pace with the accelerating economic depression. It’s a good guess that the unemployment rate had reached 13 percent by April 3. It may peak at 20 percent, perhaps even higher, and threatens to stay at Great Depression–like levels at least into 2021, maybe longer.

This country—buffered by oceans from the epicenter of the global outbreak, in East Asia; blessed with the most advanced medical technology on Earth; endowed with agencies and personnel devoted to responding to pandemics—could have and should have suffered less than nations nearer to China. Instead, the United States will suffer more than any peer country.

It didn’t have to be this way. If somebody else had been president of the United States in December 2019—Hillary Clinton, Jeb Bush, Mike Pence, really almost anybody else—the United States would still have been afflicted by the coronavirus. But it would have been better prepared, and better able to respond.Through the early weeks of the pandemic, when so much death and suffering could still have been prevented or mitigated, Trump joined passivity to fantasy. In those crucial early days, Trump made two big wagers. He bet that the virus could somehow be prevented from entering the United States by travel restrictions. And he bet that, to the extent that the virus had already entered the United States, it would burn off as the weather warmed.