Here's the GoFundMe page that will hopefully pay for her fines.

Chelsea Manning’s legal team said that the former intelligence analyst had tried to take her own life on Wednesday but was transported to a hospital where she was recovering. 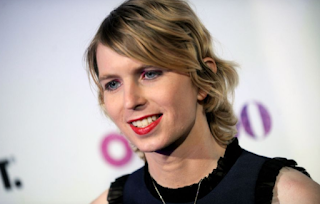 In 2010, former military intelligence analyst Chelsea Manning disclosed earth-shattering information about the nature of asymmetric warfare and U.S. handling of global affairs. And she paid dearly for it. Chelsea was incarcerated for years, including long stretches in solitary confinement, under conditions that the United Nations condemned as torture.

After millions of people around the world spoke out and demanded her release, Chelsea’s sentence was commuted. But the US government did not stop persecuting her.

Now, Chelsea has been back in jail for nine months, and faces nine more. Not because she has committed any crime, but because of her conscientious objection to participating in a secretive grand jury investigation into the publication of her 2010 disclosures.

Between their original forensic investigation and Chelsea’s detailed statement at court martial, the government gained exhaustive knowledge about her role in the disclosures. They have no need for her testimony—they obtained at least one indictment a full year before she was called to testify before the grand jury, and disclosed another two months after she was jailed for her refusal to do so.

Chelsea’s refusal to participate in this process is part of a long history of resistance to grand juries, which are routinely used to harass and entrap activists, journalists, and truth tellers. In a shocking move, the judge in the case has imposed massive fines on Chelsea, charging her $1,000 per day while the US government holds her in “coercive confinement,” ostensibly to convince her to agree to their demand that she give testimony to the grand jury.

We know Chelsea Manning’s name because she is a principled and fearless advocate for her beliefs. She is prepared to spend another nine months in confinement, and to bear the crushing debt of these unprecedented fines. Senior U.S. officials, including the Secretary of State and the President himself have publicly expressed their hostility toward her. It could not be more clear that the government wishes to punish Chelsea further for her 2010 disclosures. It could not be more clear that she will never comply with the grand jury.

Chelsea has already served half of the 18 month maximum that the government can hold her. She’s about to spend another birthday in a jail cell. The US government has no legal justification for continuing to imprison her. This must stop. Sign the petition now to send the following letter to Judge Trenga demanding Chelsea Manning’s immediate release.