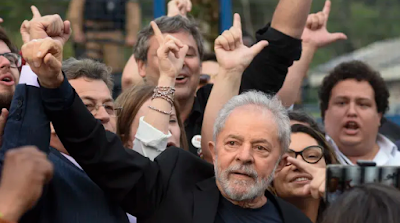 Brazil’s former president Luiz Inácio Lula da Silva has been released from prison where he was serving a 12-year corruption sentence, after a supreme court ruling which delighted his supporters and infuriated followers of the far-right president, Jair Bolsonaro.

Lula was greeted on Friday by delirious supporters outside the federal police headquarters in the city of Curitiba where he has been imprisoned for 580 days.

Lula was incarcerated in April 2018 after a sentence for corruption and money laundering handed down by the controversial judge Sérgio Moro was upheld by an appeal court.

On Thursday Brazil’s supreme court ruled that defendants could only be imprisoned after all appeals to higher courts had been exhausted, paving the way for Lula and another 5,000 prisoners to be freed.

The decision followed revelations published by the investigative website the Intercept Brasil showing Moro had colluded with prosecutors leading the sweeping graft investigation that imprisoned Lula.

Polls had showed that Lula was leading in last year’s presidential election, but the conviction removed him from the race, giving Bolsonaro a clear run.

Bolsonaro then made Moro his justice minister, heightening the sense of injustice.

Lula presided over an extraordinary period of economic growth and reduction of inequality as president from 2003 to 2010. Even in prison he has cast a long shadow over political debate in Brazil – but his release is only likely to widen political divides here.

“His freedom does not change a divided country,” said Carlos Melo, a professor of political science at Insper, a São Paulo business school. “Let’s see if this stays on social media … The atmosphere is a little tense.”

Earlier on Friday, Bolsonaro’s vice-president, Gen Hamilton Mourão, criticised the decision on Twitter. “Where is the rule of law in Brazil?” he tweeted.