Mr Flipflop and the Presumption of Innocence

Barely had trump finished praising Mrs Ford, or he released his large inner child to attack her at a rally. Turns out that Mr Flipflop's respect for innocent until proved guilty was in any case quite selective: 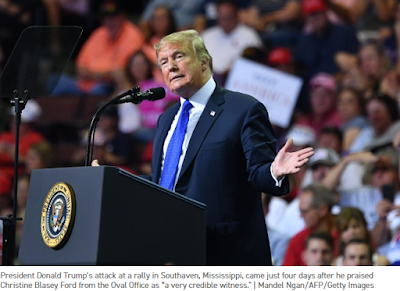 Tuesday night, at a rally in Mississippi, President Donald Trump expressed concern about what precedent a failure to confirm Kavanaugh would set. He lamented what it would mean if a stranger could cause a person to lose their job by merely making an accusation. “Guilty until proven innocent, that’s very dangerous for our country. That’s very dangerous for our country,” he repeated, emphasizing that in America, due process comes first.

Of course, he used to feel differently.

ON APRIL 19, 1989, Trisha Meili was assaulted, raped, and nearly beaten to death while jogging in Central Park. Subsequently, five boys, then ages 14 to 16, were arrested and jailed for the assault. On May 1, 11 days later, and before the conclusion of any investigation, much less a trial, Trump spent $85,000 on a full-page ad in all four of New York’s major newspapers, including the New York Times, calling on New York to “BRING BACK THE DEATH PENALTY. BRING BACK OUR POLICE!”

Even if you remember the ad from when it ran, it’s worth taking another look at the small print today. “They must serve as examples so that others will think long and hard before committing a crime or an act of violence,” Trump inveighed. “I am not looking to psychoanalyze or understand them, I am looking to punish them. If the punishment is strong, the attacks on innocent people will stop.”

All five convictions were vacated in 2002, after Matias Reyes, a serial rapist and convicted murderer, confessed to raping Meili, and DNA evidence confirmed his guilt. To date, Trump has never apologized for calling for the deaths of these innocent children.

“At what point did we cross the line from the fine and noble pursuit of genuine civil liberties,” asked Trump in his 1989 ad, “to the reckless and dangerously permissive atmosphere which allows criminals of every age to beat and rape a helpless woman and then laugh her family’s anguish. And why do they laugh? They laugh because they know that soon, very soon, they will be returned to the streets to rape and maim and kill once again — and yet face no great personal risk to themselves.” They laugh, in other words, with impunity.

This week, in Mississippi, Trump was the one laughing. With an enthusiastic crowd behind him, Trump joked about Ford’s inability to remember certain details about the night of her alleged assault, 36 years ago: “How did you get home? ‘I don’t remember.’ What neighborhood was it? ‘I don’t know.’ Where’s the house? ‘I don’t know.’ Upstairs, downstairs, where was it? ‘I don’t know. But I had one beer.’” As the crowd behind him jeered, it was difficult not to recall Ford’s fragile testimony, during which she said one thing she could never forget was the laughter of her attackers, “indelible in the hippocampus,” still echoing 36 years later.

At last Tuesday’s rally, Trump seemed to consider, for a moment, that the claims against Kavanaugh might have merit. But it didn’t seem to matter. “People are saying, ‘well maybe it’s true.’ And because of the fact that maybe it’s true, he should not become a United States Supreme Court Justice,” he said. “How horrible is this? How horrible is this?” It wasn’t a denial. It was a rejection of the premise that anything, even a credible assault claim, should stand between Kavanaugh and his destiny.