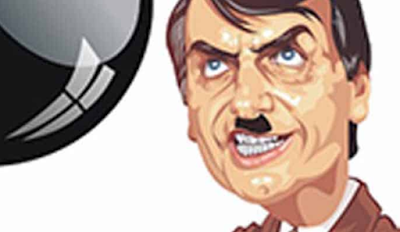 If you think Trump can be outrageous, try Bolsonaro. In his own words:

“I am in favor of a dictatorship, a regime of exception.” – Open session of the Câmara dos Deputados, 1993

Interviewer: If you were the President of the Republic today, would you close the National Congress? “There’s no doubt about it. I’d do a coup on the same day! It [the Congress] doesn’t work! And I’m sure at least 90 percent of the population would throw a party, would applaud, because it does not work. Congress today is good for nothing, brother, it just votes for what the president wants. If he is the person who decides, who rules, who trumps the Congress, then let’s have a coup quickly, go straight to a dictatorship.” – Câmara Aberta TV program, May 23, 1999

“The pau-de-arara [a torture technique] works. I’m in favor of torture, you know that. And the people are in favor as well.” – Câmara Aberta TV program, May 23, 1999

“Through the vote you will not change anything in this country, nothing, absolutely nothing! It will only change, unfortunately, when, one day, we start a civil war here and do the work that the military regime did not do. Killing some 30,000, starting with FHC [then-president Fernando Henrique Cardoso], not kicking them out, killing! If some innocent people are going to die, fine, in any war innocents die.” – Câmara Aberta TV program, May 23, 1999

“I will not fight nor discriminate, but if I see two men kissing in the street, I’ll hit them.” – Folha de São Paulo newspaper, May 19, 2002

“I’m a rapist now. I would never rape you, because you do not deserve it… slut!” – Rede TV, speaking to Congresswoman Maria do Rosário, November 11, 2003

“I would be incapable of loving a homosexual child. I’m not going to act like a hypocrite here: I’d rather have my son die in an accident than show up with some mustachioed guy. For me, he would have died. … “If your son starts acting a little gay, hit him with some leather, and he’ll change his behavior.” – Participação Popular, TV Câmara, October 17, 2010

Preta Gil, actress and singer: If your son fell in love with a black woman, what would you do? “Oh, Preta, I’m not going to discuss promiscuity with whoever it is. I do not run this risk and my children were very well raised and did not live in the type of environment that, unfortunately, you do.” – CQC, TV Bandeirantes, March 28, 2011

“If a homosexual couple comes to live next to me it will devalue my home! If they walk around holding hands and kissing, that devalues it.” – Playboy Magazine, June 7, 2011

Interviewer: Are you proud of the story of Hitler’s life? “No, pride, I don’t have, right?” Interviewer: Do you like him? “No. What you have to understand is the following: war is war. He was a great strategist.” – CQC, TV Bandeirantes, March 26, 2012

Interviewer: Have you ever hit a woman before? “Yes. I was a boy in Eldorado, a girl was getting in my face…” Interviewer: Put her against the wall, a few taps? Pah! “No, well, no… [laughs] I’m married. My wife isn’t going to like this response.” – CQC, TV Bandeirantes, March 26, 2012

“[Homosexuals] will not find peace. And I have [congressional] immunity to say that I’m homophobic, yes, and very proud of it if it is to defend children in schools.” – TWTV, June 5, 2013

“Violence is combated with violence.” – The Noite with Danilo Gentili, SBT, March 20, 2017

“I went with my three sons. Oh the other one went too, there were four. I have a fifth also. I had four men and on the fifth I had a moment of weakness and a woman came out.” – Speech at the Hebraica Club, Rio de Janeiro, April 3, 2017

“If I [become president], there won’t be any money for NGOs. These worthless [people] will have to work. If I get there, as far as I’m concerned, every citizen will have a firearm in their home. You will not have a centimeter demarcated for indigenous reserves or quilombolas [settlements of the descendants of escaped and freed slaves that have protected status.]” – Speech at the Hebraica Club, Rio de Janeiro, April 3, 2017

“Has anyone ever seen a Japanese begging for charity? Because it’s a race that has shame. It’s not like this race that’s down there, or like a minority ruminating here on the side.” – Speech at the Hebraica Club, Rio de Janeiro, April 3, 2017

“The big problem in Brazil is that the government is at the jugular of businessmen. […] The worker will have to decide: less rights and employment or all the rights and unemployment.” – Event in Deerfield Beach, FL , October 8, 2017

“Since I was single at the time, I used the money from my [congressional] housing stipend to get laid.” – TV Folha, January 11, 2018

“This group, if they want to stay here, will have to put itself under the law of all of us. Leave or go to jail. These red marginals will be banished from our homeland.” – Live video address to a rally in São Paulo, October 21, 2018

“You will not have any more NGOs to quench your leftist hunger. It will be a cleansing never before seen in the history of Brazil.” – Live video address to a rally in São Paulo, October 21, 2018

“You will see a proud Armed Forces which will be collaborating with the future of Brazil. You, petralhada [a derogatory term for Workers’ Party supporters] will see a civilian and military police with a judicial rearguard to enforce the law on your backs.” – Live video address to a rally in São Paulo, October 21, 2018