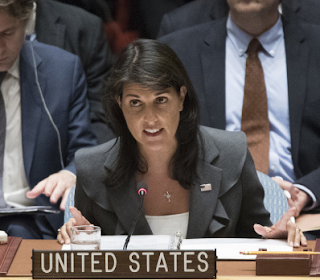 Nikki Haley, contender for the title of Mordor's most despicable ambassador to the UN of all times

The United States will withdraw from the U.N. Human Rights Council, an entity it has long accused of being biased against Israel and giving cover to rights-abusing governments, the Trump administration announced on Tuesday.

Secretary of State Mike Pompeo and the U.S. ambassador to the United Nations, Nikki Haley, announced the decision, a move that essentially reverts the U.S. to the stance it took during the George W. Bush administration, which declined to join the council. Haley and Pompeo‘s announcement came a day after the U.N.’s human rights chief, in a speech to the council, criticized President Donald Trump’s immigration policy decisions that have led his administration to separate families apprehended after entering the U.S. illegally.

“For too long the Human Rights Council has been a protector of human rights abusers and a cesspool of political bias,“ Haley said.


On the other hand, Israel, a major ally of the US, praised Washington's "courageous" move.